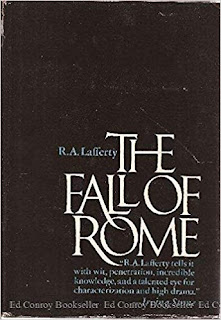 The Deeper We Go, or Oh What a Tangled WWW we Read, or More Links than a Sausage Factory

This is the double edged sword of reading Lafferty with a Web browser handy. Martin Crookall, in his Author For Sale blog, recently posted his thoughts on Archipelago: https://mbc1955.wordpress.com/2019/11/13/the-man-who-wrote-lafferties-archipelago

Reading this reflection led me to reflect on my experience reading Archipelago and discussions various Lafferty fans and I have had about it. I especially loved the interlude where Hans is sitting in a cafe in a drunken reverie thinking about talking to Marie Monaghan and then transitioning into actually talking with her, with no real transition in the narrative between the two states. You can read the passage on DOJP's wonderful blog here: http://antsofgodarequeerfish.blogspot.com/2016/02/reading-argo-cycle-part-2-archipelago.html (and of course, I blogged about it here: http://www.yetanotherlaffertyblog.com/2016/06/drunken-reveries.html).

Reading this, I paused over the passage where Hans is trying to figure out how to describe Marie's eyes. She had green eyes, and he didn't know how the classics would have described them. He reflects on a verse:

"Nicolette had eyes of vair,

Something, something, yellow hair—"

But vair had become vert with the disintegration of the French soul, and it was no longer the green of the Troubadors: ignorant wise men even said that vair was a shade of gray.


So, I highlighted the line "Nicolette had eyes of vair", right clicked, and chose Search Google. This led me to someone having a very similar rumination about the meaning of "vair" to describe eyes in Aucassin and Nicolette: a Love Story by Francis William Bourdillion published in 1867, an examination of the medieval romance of the same name: https://books.google.com/books?id=Z7oPrY9GJlIC&pg=PA166&lpg=PA166&dq=Nicolette+had+eyes+of+vair&source=bl&ots=yqbUwXykR9&sig=ACfU3U30WgGa7RQFHXhrQlCyGLd2Pqf-hQ&hl=en&sa=X&ved=2ahUKEwi_s-be9urlAhURP6wKHY5jAfEQ6AEwAHoECAEQAQ#v=onepage&q=Nicolette%20had%20eyes%20of%20vair&f=false

Looking for a bit of background led me to the Wikipedia article. Wikipedia is my constant friend when reading Lafferty's novels. Aucassin et Nicolette is a late 12th C or early 13th C novel. It is a love story across class lines and of the Love-wins-over-Duty genre. It is a chantefable, a combination of prose and verse, so every few paragraphs, at least one of the characters bursts into song.  Here's the article: https://en.wikipedia.org/wiki/Aucassin_and_Nicolette

So I went back to my Google search window and searched for "Nicolette had eyes of vair yellow hair". This brought me to one of those specific instances of song in a 1910 translation of Aucassin and Nicolette.:

There were gathered shepherds all.

Martin, Esmeric, and Hal,
Aubrey, Robin, great and small.
Saith one, "Good fellows all,
God keep Aucassin the fair,
And the maid with yellow hair,
Bright of brow and eyes of vair.
She that gave us gold to ware.
Cakes therewith to buy ye know,
Goodly knives and sheaths also.
Flutes to play and pipes to blow,
May God him heal!


And the link to that search is here: https://books.google.com/books?id=mr4OAQAAIAAJ&pg=PA27&lpg=PA27&dq=Nicolette+had+eyes+of+vair+yellow+hair&source=bl&ots=QcN-d60LQ1&sig=ACfU3U3DP15otCEaEihZAfjuqQiBE48xwA&hl=en&sa=X&ved=2ahUKEwiXlLHJ7OrlAhVQrJ4KHaURBoQQ6AEwAXoECAgQAQ#v=onepage&q=Nicolette%20had%20eyes%20of%20vair%20yellow%20hair&f=false


As has become my usual experience falling down the rabbit holes of Lafferty's classical allusions, there is substance at the bottom of even the most throwaway-seeming remark. It's just that Lafferty, and his characters, are far more well-read than I! 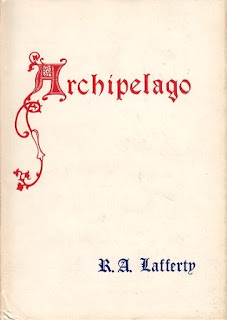 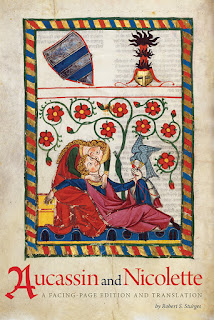 I have commented often that Fourth Mansions is my favorite book by any author in any genre. Why do I feel so strongly about it?