"There are two kinds of silliness. Something can be frivolously silly or deeply silly. This is very deeply silly."

My Father's comments after I urged a copy of Space Chantey into his hands. He considers this every bit as good (and underrated for serious consideration) as the George Clooney movie made from the same source.

I think he is very much right. In the opening paragraphs, Lafferty asks if there will be a mythology in the future, when computers record every action. Yes, is his reply: In one of the most frequently quoted passages from this book:

WILL THERE BE a mythology in the future, they
used to ask, after all has become science? Will high
deeds be told in epic, or only in computer code?

And after the questing spirit had gone into overdrive
during the early Space Decades, after the great
Captains had appeared, there did grow up a mythos
through which to view the deeds. This myth filter was
necessary. The ship logs could not tell it rightly nor
could any flatfooted prose. And the deeds were too
bright to be viewed direct. They could only be sung by
a bard gone blind from viewing suns that were suns.

He then goes on to recount outrageous exaggerations of Captain Roadstrum's travels and travails--all accompanied with a low-doggerel poetic Odyssey. This leads me to wonder how much a bit of silliness and exaggeration are necessary for something to stick in the mind of the public. The events of the Iliad and the Odyssey were always written as high mythologizing of the events and people. Because the actions were outrageous, they were remembered, and as a result, so were the moral, cultural, and historical lessons contained therein.

One look at today's media tells us this mechanism for cultural memory is still at work. Listen to co-workers discussing who won American Idol or The Bachelor or what-have-you, and you realize that silliness is very much present. All that is missing is depth. 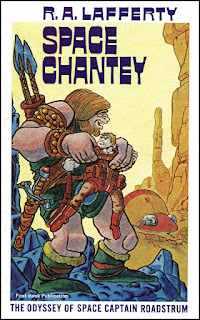