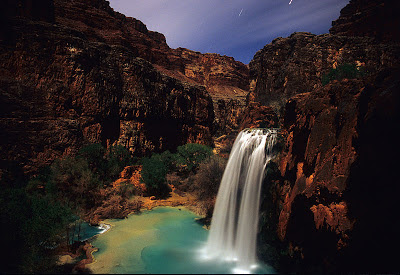 Havasu Falls at night, courtesy of Wikimedia Commons
Posted by Kevin at 10:45 AM 2 comments:

Re-reading some of my favorite stories in Nine Hundred Grandmothers last night I revisited the thought that Lafferty's stories reward re-reading. This is not true of everything I read. I read a lot, and some books, while well written and fun to read, do not bear re-reading as much as Lafferty's and a few other authors' as well. Take for example Tolkien. How often do you re-read The Lord of the Rings? It is a rewarding experience, and I catch something else with each pass through the trilogy. Tolkien's text is so richly layered and dense with ideas, that each reading prepares me to understand themes and techniques that would not have leaped to mind without the prior reading. This happens to me at least once a year with Lafferty's Fourth Mansions. In my most recent re-reading, I was looking for instances of the "prose foot" described by Don Webb in his essay on "Effective Arcanum." Needless to say, Fourth Mansions is loaded with examples--every time he refers to Bedelia as a cinnamon cookie, he recalls the first chapter and his description of Bedelia's character when Harvesters invaded the mind of Miguel Fuentes.

It is much harder to write a short story that has the re-readability of a richly layered novel. Yet Lafferty achieved exactly that. Re-read "Hole on the Corner" or "Narrow Valley." Even though I know the jokes and the twists far in advance, I burst out in delighted laughter every time I come across them again. Like with his prose foot in his novels, re-reading his turns of phrase and cleverly developed situations recall to me the sheer delight I experienced the first time I read through them. Re-reading a Lafferty story is a full-body experience. 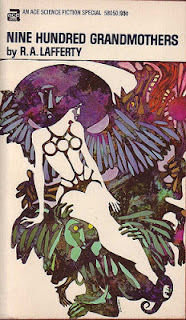 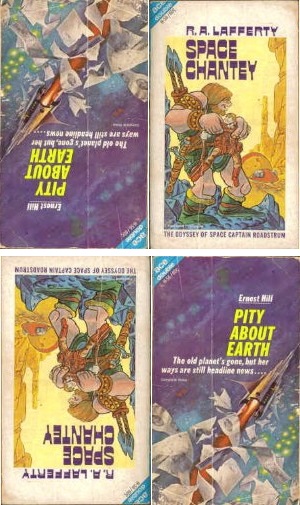 Rereading Lafferty's The Fall of Rome the other day, I came across a paragraph that I think sums up his approach to history: Opinionated without apology.

This is a paragraph where he is discussing what remnants and artifacts survive to tell us about the culture of the Goths in the 5th century AD.

"The dance is something with no survival, lacking verbal or pictoral record. The Goths may have had it. If they painted, it was not in a medium or on a material that has survived. Their history was unwritten. Their scientific speculation may not have gone beyond mead-table discussions and arguments. There is no record of their early philosophy. Since they were Germans, they must have constructed philosophical systems; and also, since they were Germans, these would have been erroneous."
R. A. Lafferty
The Fall of Rome