Lafferty's Fourth Mansions is my favorite book. It is the book I re-read most often, the book I enjoy the most, the book I draw the most encouragement from. There may be better books in the world, for instance I argue that Okla Hannali is both better written and more important. However, since I first encountered it, sometime around my 19th year, I have not found a book I enjoy reading more than Fourth Mansions.

On the other hand, there are many readers who do not resonate as strongly with the book. For some it takes two or three readings to catch on to what it is doing, and for some it will never click. I understand that every reader is different, and different aspects of Lafferty's writing resonate differently with each of us. However, I still ponder the mechanisms--the reason this book instantly hit all my resonant frequencies while leaving others cold.

One cause may be the way Lafferty plays with levels of metaphor so freely that it is not always apparent what is in the "reality" of the narrative and what is metaphorical. For example, in one scene Freddy Foley is trying to reach Biddy Bencher over a long distance:


Freddy called her up, not by phone. Other forms of communication had come onto him lately almost without his noticing them. He got her but could not get her attention. She was lounging on subterranean beaches and wild dogs were tearing her apart. “You’re missing pieces, you’re missing the best pieces,” she kept calling at the tearing dogs. “All you’re tearing off is the legs. Don’t any of you like the white meat?”
Freddy couldn’t get her attention that way. Finally he called her on the telephone and she answered on the fourth ring…

I had no trouble with this passage. It's actually very funny. Freddy has been touched by the brain weave of the Harvesters and is in constant mental contact with everyone who is part of the weave or has also been touched by the weave. However the parts of consciousness connected by the weave are often a part of the person's subconscious, so the events that occur in the weave are more like the events in a dream. They are metaphorical and sometimes nonsensical in the same way that dreams are, but they do contribute to the tenor and the interpretation of the events happening in the "real" world of the book.

In this passage, Freddy has realized that because of the weave, he has powers of communication and insight that he'd never had before. He tries to use these powers to communicate with Biddy, but because she is a distractible and impulsive young lady with a rather lurid subconscious imagination, these abilities are useless. Freddy then has to use more normal or mundane means to reach her.

In a way Lafferty is poking fun at his own invention. Most SF authors come up with a nifty gimmick, and it becomes the lynchpin for the narrative of the book. Consider Heinlein's Time for the Stars in which scientists discover telepathy between certain identical twins. That communication becomes the core of the narrative of interstellar exploration. Heinlein treats his invention with great reverence. Lafferty, on the other hand invents the brain weave, which has tremendous impact on the narrative and reveals the actions and motivations of the characters on several levels of consciousness, and then in this scene dismisses it as being superfluous and not very helpful--at least at that particular moment. In parallel, imagine if someone invented a way of connecting all the sources of knowledge and computing power over the world, and people mostly used it for posting pictures of their cats or what they ate for breakfast...

Once Freddy is touched by the weave, he slowly uses more and more of the capabilities it gives him. He sees in the dark, seeing with Harvester eyes, with Toad eyes, with Falcon eyes, with Patrick eyes. "One misses so much who uses one set of eyes." He gets updates from Miguel Fuentes and reports on his revolutionary movement--even drawing him accurately from memory without ever having seen him. He follows the battles and plots of the Harvesters. This allows the narrative to follow Freddy, but also to report in detail on all the other groups of characters who have become connected. However, many of the events come through the weave and are on a metaphorical level. The vision of Richard Bencher doing battle with the dragon or hydra that the weave has become is happening on a level that Bencher is not even consciously aware of. We never know if Biddy's demon boyfriend is a real demon of Hell or a metaphor for the energy of the weave--though I suspect it is intended as real. And then there's Bagley's dog-ape plappergeist, and the weave-inflected metaphor for the world in Michael Fountain's lectures.

I can imagine that some readers have trouble switching so quickly and so often between layers of metaphor and reality. 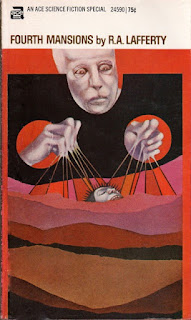 This may come as a surprise (though it shouldn't), but I am a fan of many different authors. R. A. Lafferty is at the top of my list, but I am also rather ardent (and therefore perhaps dangerously boring in conversation) about Howard Waldrop, Ursula Le Guin, Barry Hughart, Tony Hillerman, Edward Abbey, Kurt Vonnegut, Richard Brautigan, etc. Depending on what I am reminded of in conversation, you may find me forcing a book by any of those authors into your hands.

Notice that I mentioned Waldrop and Le Guin first after Lafferty in that second sentence.
In a way Lafferty is a great unifier. His fans span the literary gamut from those of us who possess remarkably little talent but love to read to those who are Literary Giants. And yet, we all enjoy sharing our love of Lafferty, without acknowledging any kind of hierarchy.

As an ardent Lafferty fan, I have stumbled into being the editor of Feast of Laughter, our semiannual Lafferty fanzine ("bookzine" as Michael Swanwick called it). While this is the result of countless hours of dedicated work by some really talented and devoted people, of which I am only one contributor, I still get to claim the title. This has led to some truly neat things happening, and sometimes not happening but in really neat ways:

The other day, some months ago, I asked Lawrence Person if he could contact Howard Waldrop on my behalf asking permission to reprint "Willow Beeman," a deliberately Lafferty-esque collaboration by Steven Utley and Howard Waldrop. He gave me Howard's phone number.

Understand, I have loved Howard Waldrop's writing for decades, ever since encountering "The Ugly Chickens" in a copy of Best Science Fiction Stories of the Year: Tenth Annual Collection in the UNM Library sometime around 1984 or '85. He is very high up in my pantheon of literary gods. So it was with some trepidation that I called him the next morning. I was afraid I would be too much a smitten fan boy to sound like a professional editor. Yet when I started talking to Howard, he is such a genuinely kind person he immediately put me at ease. He was happy to spend an hour on the phone chatting about what Lafferty had meant to him, how Lafferty's writing had inspired him, telling me stories about Lafferty at conventions, and telling me the story of how he and Steven Utley had decided to write their Lafferty story. I have since had numerous phone conversations with him. He is always gracious, kind, and excited about helping preserve R. A. Lafferty's place in the literature of Science Fiction. And yes, we did publish "Willow Beeman" in Feast of Laughter #2 this spring.

On another day a couple of weeks ago, I sent an impassioned rambling letter to Ursula K. Le Guin professing my love of her work and asking her to contribute something to Feast of Laughter. While this contact didn't work out anywhere near as amazingly as did my contact with Howard Waldrop, I did receive in the mail last night a very gracious hand written letter from her saying she was honored by our request and that she applauds our efforts to preserve Lafferty's writing. She doubts she will be able to write anything for us, but will keep it in mind. If you are going to turn someone down, that is the way to do it--with kindness, graciousness, and class.

That Lafferty's writing can unite so many talented, intelligent people shows the power of literature to eliminate barriers and bring us all together.