"Frog on the Mountain" is one of the Great Stories.

Last weekend, we went up to the town of Dillon for a chamber music festival (mindblowingly great concert, by the way, check 'em out: www.alpenglowchambermusic.org). We stayed overnight, and the view from our hotel window in the morning reminded me of the opening phrase of "Frog on the Mountain":

He woke to mountains.

Re-reading it, I was struck again by how beautifully crafted the opening is, from the first "He woke to mountains" to the second utterance of the same phrase.

Go back and re-read those first few pages. I'll wait.

Garamask's assertion that he hates space, but loves worlds brings to mind the Bradbury story, "No Particular Night or Morning," which is a dialogue between two extremes, embodied in the characters of two passengers of a spaceship far between planets in deep space. Hitchcock cannot believe in anything he cannot see and touch, so he no longer believes in Earth. He then begins to doubt even his immediate memories and deteriorates into disbelief of everything. Clemens has enough imagination to bolster his memories and experience Earth in his mind, allowing him to believe in it.

Garamask expresses with great vitality the need to experience worlds directly, and accuses the distance of space of destroying that experience:

"I have, let us say, a passion for a certain unkempt and mountainous world, but space comes near to destroying that passion in me; for I have seen that world appear on the scope like a microbe, and I will watch it disappear like a microbe again. I have studied epic and towering things under the microscope. And when I put away the microscope, I know that the towering things are really too small to see. From the aspect of space, all the towering and wild worlds that I love are things too small to see or to believe in. I love a big world, and I hate space for spoiling that bigness."

While he is vital and direct, he is also lacking a fundamental imagination that allows the rest of us to conceive of worlds we cannot experience. The captain calls him on this:

"Mr. Garamask, weren't you ever young?” the Captain asked him.

"I am young yet, Captain. I am physically the fittest man on this ship. And this is a very young and aspiring idea that I am effecting now."

"Ah, were you never something else, Mr. Garamask, not quite so young, and much more awkward?"

This awkwardness is a huge part of what makes us human. The Oganta have it in abundance. It is funny that Garamask is undeniably the hero of the story, but he cannot partake of the awkwardness.

"Frog on the Mountain" is very much in the vein of Fourth Mansions in that Garamask has to incorporate the strengths of all four monsters to be a "fully charged human." He has to fight each monster in its element and style, to essentially become the monster to defeat it, so he must incorporate the characteristics of "Sinek the cat-lion, Riksino the bear, Shasos the eagle-condor, and Bater-Jeno the crag-ape or the frog-man (depending on the translation)." He handily defeats the first three monsters (though Riksino only with help).

The story leaves us in the middle of the last battle. Garamask is clearly a Hemmingway-esque adventurer-hero. In a mid-century American story in the standard mold, the adventurer-hero wins a clever and decisive victory--usually one that emphasizes his values and worth as a man. However, with that opening exchange between the Captain and Garamask, Lafferty shows gives us some uncertainty. The primary characteristic of Bater-Jeno is the awkwardness of the Oganta. Can Garamask overcome his own nature to beat Chavo the Oganta at his own oafish and awkward game? We cannot be sure of the outcome.

Back to the opening: Those first few perfectly crafted pages change our understanding of the story. By giving us that exchange, Lafferty does two things that he revels and excels in. Firstly, He sets up the story we are about to read--the rugged spacefarer taking on the challenges of a new world with only his wits and vitality--while deliberately subverting the storyline. Secondly, he leads us to imagine experiencing directly a powerful and beautiful action, waking to mountains. 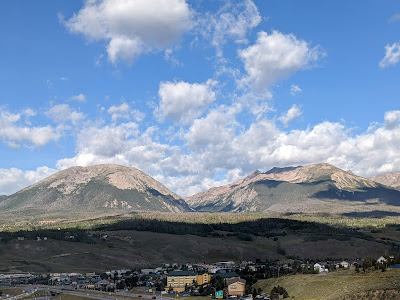