Apocalypses is a great example of R.A. Lafferty at the top of his form in the early '70s. Dense, introspective prose filled with wordplay and events rushing by breathlessly. It is simultaneously a breezy, enjoyable read, and a dense, wooly challenge to grasp. He gives us the events in a quickly readable form, but makes us work very hard to understand what is going on beneath the surface and between the events.

Apocalypses contains two novellas about consensus reality, "Where Have You Been, Sandaliotis" and "The Three Armageddons of Enniscorthy Sweeney." Both beg the question of what is real and if enough people believing something real makes it so.

"Where Have You Been, Sandaliotis" is a detective story. The 300-mile long peninsula of Sandaliotis has suddenly reappeared connecting southern France to Corsica. Is it real, or is it a fraud. It appears to have been there all along with a history thousands of years deep, or is that history a counterfeit? The worlds greatest detective, Constantine Quiche, is on the case. Can he find out what is going on or is he just an elaborate counterfeit himself? We never find out.

"The Three Armageddons of Enniscorthy Sweeney" follows the life of the great impresario, Enniscorthy Sweeney, and the change in history of the 20th Century. The 20th Century had been the Golden Century, the century in which humanity realized war was no longer possible and universal prosperity and well being were not only possible but imperative. It started with the inauguration of Harold Standpipe, the tall, thoughtful black statesman and humanitarian from Chicago as President of the United States in 1901. Then in 1917, Enniscorthy Sweeney produced his first Armageddon opera about a tremendous world war, and soon history adjusts to make it have been real. Then he produced his second Armageddon opera about an even more horrific world war, and history adjusts itself again. They are preparing to produce his third Armageddon opera--as one historian notes, “The situation worsens.” The whole novella is written as the material for a documentary-like study of Sweeney's life. It is told through small narrative segments of his life, reviews of his operas, interviews with various people involved in his life, excerpts of his letters, etc. There is no section of straightforward narrative more than a page or two long, and the narrative voices change out frequently.

In my opinion, "The Three Armageddons of Enniscorthy Sweeney" is the stronger of the two novellas, a more challenging read, and a more (I think) rewarding one. I'd love to see someone do a real solid comparison of the use of alternate history or "consensus reality" in this story with the treatment of the same themes in Philip K. Dick's The Man in the High Castle. 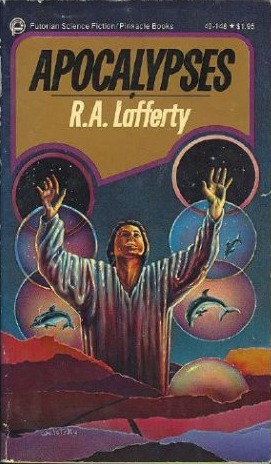